1. Background to the promotion (emergence of the non-face-to-face and digital transformation era)

With advent of the Fourth Industrial Revolution, numerous innovative cutting-edge technologies in the industry, medical, and environmental sectors have been introduced, leading to a new paradigm shift throughout society. Our society is now becoming a hyper-connected society due to the emergence of various new and powerful technologies such as artificial intelligence, big data, and cloud computing, accelerating the shift from existing centralized platforms to decentralization. At the same time, our society is also evolving into a customized intelligent society based on the principles of opening and sharing. With the emergence of the Fourth Industrial Revolution, the non-face-to-face culture and digital transformation have also been accelerated due to the spread of the COVID-19 pandemic. As the global pandemic is prolonged indefinitely, face-to-face activities have declined, whereas the non-face-to-face economy has grown exponentially.

* “Accredited certificates” refers to a kind of digital identity certificate issued by an accredited certification body designated by the government after undergoing a strict examination procedure. It is an electronic signature used to prove the identity of the signer in various areas, such as Internet banking, online stock, e-commerce, e-government civil services, and electronic tax invoicing.

* According to Article 1 of the 「Digital Signature Act」, the act aims to “secure the safety and reliability of electronic messages and to promote their use”, and the accredited certificate was developed and used as a means of proving whether electronic documents have been falsified or altered. 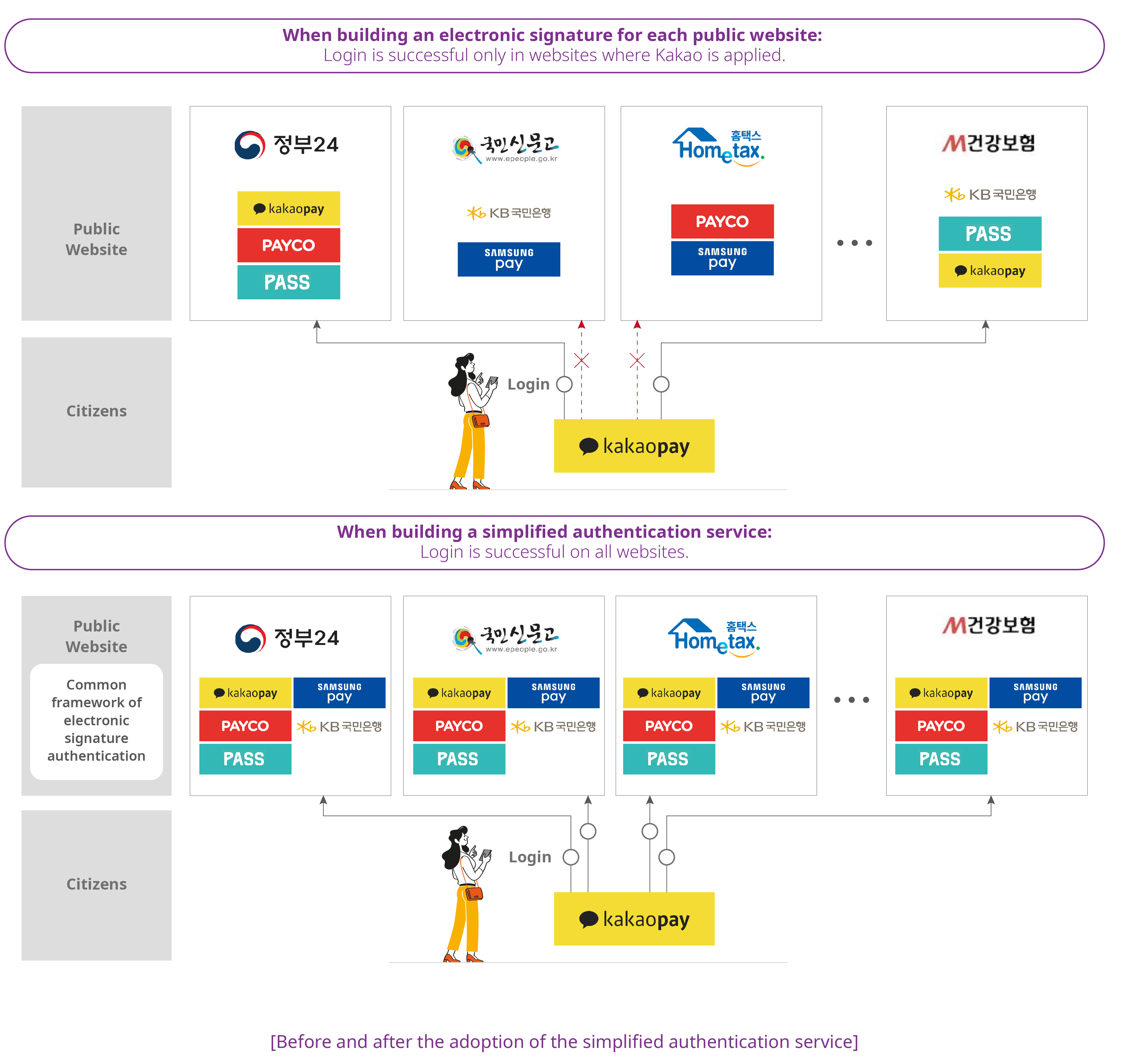 * A regulatory sandbox targeting ICT-combined services. The term “regulatory sandbox” originates from the idea of a sandbox where children can play freely. It refers to a system that allows testing by partial exemption or deferral of the existing regulations within a certain period or area to encourage the creation of novel products and services without suppressing innovation, as rapidly changing new technologies and industries may collide with the existing regulations.

In recent years, as non-face-to-face services have expanded, the limitations of physical ID cards have been recognized, with the result that much attention has been paid to mobile ID cards. Mobile ID cards are ID cards that can be generated and used by storing a national ID card on a mobile device in a digitized state. The use of existing plastic ID cards is now extremely restricted online, and only some non-face-to-face financial services use photos in plastic ID cards for identification purposes. Plastic ID cards are not only inconvenient to carry but also vulnerable to the exposure of sensitive personal information and such risks as theft and forgery, so nowadays people generally keep and use them at home rather than carrying them around on their person. On the other hand, mobile ID cards can be used both offline and online, and only required information can be selected and provided, which is advantageous in various respects. In addition, the mobile ID card can overcome the drawbacks of existing IDs because it is resistant to forgery and alteration as it is based on blockchain technology.

The Ministry of the Interior and Safety and the Ministry of Personnel Management initially introduced the 'mobile civil service card' to some ministries in January 2021 as a pilot project to verify and evaluate its stability in the public office environment, before introducing the nationwide mobile ID as part of an integrated online and offline identification system. The mobile civil service card can be used together with existing plastic civil service cards, both online and offline, after receiving it via a smartphone app. Civil servants can also use this when exiting and entering security gates in the Government Complex Sejong and the Government Complex Seoul, as well as in the National Library of Korea, Sejong when they wish to borrow a book.  In addition, mobile civil service cards can be used when logging in to personal computers and apps without using the Government Public Key Infrastructure (GPKI) online, and without having to store or submit mobile evidence documents.

The government plans to expand mobile licenses starting with mobile civil service cards, followed by mobile driver's licenses in 2021, national merit certificates in 2022, and disability registration cards, alien registration cards, and youth ID cards from 2023. The mobile driver’s license, the first mobile ID card intended for all citizens, will be run as a pilot project from January 2022.

In contrast with a physical license, the mobile driver's license stores information only on the user's mobile phone, and users can provide only the information they choose. The mobile driver’s license has the equivalent effects of a physical driver’s license. It can be used both online and offline, as it can be used not only for issuing civil services, opening non-face-to-face bank accounts, and renting vehicles, but also for presenting an ID at a government office or an ID to verify one’s adult status at a convenience store.

According to a report issued by the McKinsey Global Institute in 2019, countries that use digital identification will generate a significant increase in economic value equivalent to a rise of 3 to 13% of their gross domestic product by 2030. Digital identification is the key to the inclusive growth that individuals, companies, and governments all seek to benefit from. Accordingly, the Ministry of the Interior and Safety is committed to leading innovation in the public and private sectors beyond the innovation of government through digital identification.